It’s been a good weekend, other than the fact that I keep having bouts of sleepiness and stuffiness in what seems like a constant fight to keep from getting sick.

Friday night was a chill night with my friend. We went to Olive Garden, and I tried OG’s zeppoli for the first time (italian sugar coated donuts with raspberry and chocolate dipping sauces). I may now have a reason to go there just for dessert sometime.  After I left her, I had some time to kill while Jon finished at gaming, so I had a coffee and some reading time at Hastings.

We’d planned to take a walk and go geocaching on Saturday, but the weather wasn’t as agreeable as we’d hoped. Though the temperature was warmer than it has been, it was really windy and cloudy, and we got a little bit of rain. We also couldn’t seem to figure out where to buy a park pass to go hike around Tuttle Creek State Park. Once we find out where we’re going to be moving to, I’m definitely investing in an annual state park pass.

It worked out okay since we were saved from being caught out in the weather. We did make a pit stop at the dam to take some pictures and look for a geocache that we didn’t end up finding. 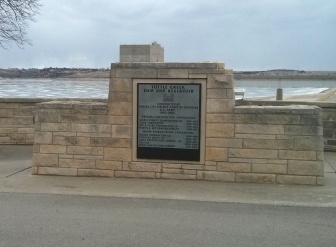 It was fun climbing around on the rocks to look for the cache, but it was a bummer that we didn’t spot it. The wind was biting, so maybe we’ll have better luck on a warmer day.

We chilled at our house sitting house for the afternoon and watched This is 40, which I thought was pretty funny. Later, we went to our friends’ house for some  social time and to get a check on the car. We also watched Iron Sky, which was…as expected…pretty ridiculous.

Today, the weather was more agreeable, so we relaxed through the morning, then took a walk around the neighborhood before going to lunch at Longhorn’s. I tried the Parmesan Crusted Chicken this time. So good! Afterwards, we headed back to Wamego and decided to take further advantage of the nice weather by walking the track and doing a zombie mission. This might not have been our best idea, since lunch was really filling and I felt sluggish the whole walk. But in hindsight, I’m glad we did it.

I’m sleepy tonight and as I’ve been writing this, my throat has gotten progressive sorer, so I think I need to go ahead and lay down early and try to sleep it off. I’ll read for a little bit. I’m currently reading Geek Love by Katherine Dunn. It’s not about dating nerds. In fact, it’s a very unsettling novel and definitely a turn from the stuff I’ve been reading.

As for my January goals regarding coursework and novel revision, I’m not sure if I’m going to reach them, but this week I'[ll be kicking things into high gear. I also start a new Coursera course tomorrow. More friends are going to be in town this week, and I’m excited to see them, but we’ll see how much social time we get. Either way…I can’t be sick, so fingers crossed that I wake up feeling great tomorrow morning.