This review is going to take a different tone than my normal ones because this book isn’t a romance. I first heard about A Little Life on the podcast Books on the Nightstand. It caught my attention because of how it affected one of the co-hosts, and I was intrigued. Now, after having read it, I know she wasn’t exaggerating. This book completely wrecked my emotions.

Trigger warnings: While I want to recommend this, I need to note several triggering items contained in this book for readers who don’t wish to read about certain things. The book contains themes and graphic descriptions of the following: physical and sexual child abuse, violent domestic abuse, drug use, cutting, and suicide. 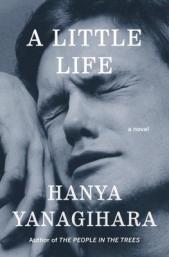 Synopsis
The book tells the story of four friends after they graduate from college, each with their own issues, insecurities, and plans for the future. It spans several decades and touches on each of their lives, but at the center of the story is Jude, a quiet man who has problems with his legs due to an incident in his past that he won’t talk to anyone about. In fact, Jude doesn’t tell anyone about his past, a fact which his friends try to respect even though it brings about a good amount of resentment from them.

The Story
The story jumps times, moving forward when ready to show the characters after a span of time and going back to show the details of Jude’s childhood. Though sometimes the timeline isn’t clear, the story is well written and well paced. The reader glimpses the lives of the four friends as well as several people that come into their lives later to play important roles. There is also an evolution to the friends’ core relationship. At times they drift apart or have falling outs. Other times, their relationship changes to more than friendship, and while there is a hint of romance in this book, it’s read with caution and the worry that things are not going to turn out well.

The People
The characters are multi-dimensional, but rather than show the reader the characters in one shot of exposition, the author unfolds their stories over the multi-decade narrative. This is especially true of Jude’s story. The way this is done kept me on edge and always feeling the tension and emotion in the story. I’d no sooner come to terms with one aspect of Jude’s life before being shown another aspect.

The Emotion
I’m holding back from saying too much because I think this book needs to be experienced for its full emotional value. However, I will admit that I cried quit a bit while reading this book, and even more after finishing it. The story was so powerful to me that I was still thinking about it the next day, and still getting emotional about it. And it wasn’t a quiet cry either. It was an all out sobfest, complete with puffy eyes the next day.

Final Thoughts
I want people to read this, but I want them to know that they’re getting into a very sad story about mostly good people. This is not a feel good book, but it does make you feel things, some good, some bad. It’s also not a quick read. It’s a long book (700+ pages) and it’s one that should be absorbed, not skimmed.