I’m just going to keep riding this Beauty and the Beast train as long as I can. Since discovering Elizabeth Hoyt, I’ve been kind of hooked. Her historical romances are sweet, intriguing, and highly steamy, and her characters are interesting and don’t always fit the normal trope mode. 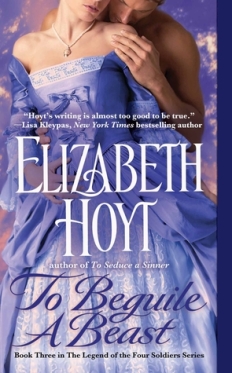 One-Sentence Synopsis
A duke’s mistress escapes with her two children, ending up at the home of a reclusive, scarred man to serve as his housekeeper. For a full synopsis, see this book’s Goodreads page.

The Good Stuff
I’m going to preface this by saying that the premise of a mistress with children didn’t actually hit my trope buttons. But, you know…it’s B&tB, so I went for it. I’m so glad I did. Alistair is a great “beast” with his scarring and his gruffness, though he comes around when it comes to the children, who are kind of annoying, but also kind of charming.

Though she acknowledges the scarring, I loved that what draws Helen to Alistair isn’t only the initial intrigue but the fact that he genuinely wants her (and turns her on, obviously). After having been kept by a man who saw her as nothing more than a possession, she’s definitely getting a taste of the other side of things.

Like most of Hoyt’s work, there is a good deal of suspense and a dash of danger. Having not been a romantic suspense fan in the past, I can honestly say I love the way she weaves the two genres together. This isn’t one of her most dangerous novels, but I liked the clever resolution.

The Romance Factor
Talk about the feels…these 2 are so angsty with their standard trope dynamic: she thinks she’s not good enough for him, he thinks she can never look past his scars (when in reality they’re both hot for each other). There are alot of sweet moments, though, so I have to give this one a 5/5.

Final Thoughts
Another great B&tB retelling and another great novel from Elizabeth Hoyt. I don’t know why I haven’t read her before, but now that I’ve “discovered” her, I have to add her to the must-read list.

One thought on “To Beguile a Beast by Elizabeth Hoyt”