I knew it was only a matter of time before I finished this series, and I feel a little sad about it. I mean, yeah, I’m going to read them again, especially 2, 4, and 6 in the series, but I really love this world and really don’t want the author to stop writing for it. 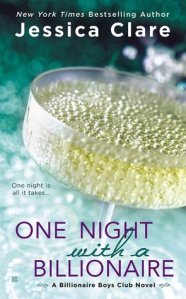 One-Sentence Synopsis
A make-up artist spends a fantastic night with a billionaire but can’t take it further because the singer she’s touring with has called dibs. For a full synopsis, see this book’s Goodreads page.

The Good Stuff
Kylie is a great character. She’s a big girl, and I love that no one skirts around this. Cade never tries to tell her she’s not fat to make her feel better. Instead, he’s genuinely attracted to her and loves her for who she is. Though she has personal issues with her weight, it never becomes overpowering to her character or takes away from the story itself. Like most of these books, this one was body positive and sex positive.

Things That Made Me Go Hmmm
Daphne is back. She was heavily featured back in The Wrong Billionaire’s Bed and was pretty horrible up until she made a promise to her sister to get clean. As you can imagine, she broke that promise and is a hot mess in this one. She’s also a heinous person working for a record label that’s just as heinous.

I spent the entire book hating her, but then my emotions got toyed with, and once again, she turned out to be okay. I know the other books made me emotional at points, but I think this one was by far pushed most of my buttons.

The Romance Factor
Kylie’s lack of confidence was endearing and added to the conflict when she didn’t think she could compete with Daphne. Cade’s determination to keep Kylie was so alpha, but so sweet. Heck yeah I wanted these two to get together. 5/5

Final Thoughts
This is my 3rd favorite in the series, I loved every minute of it. I’m so sad to be done with this series, but at least I now own them all and get to read them again.