Clan feuds, Scottish warriors, and a redhead who’s milkshake seems to bring all the boys to the yard, even if she doesn’t want them. Okay, that’s a little exaggerated. Two boys in particular, which sets up a nice conflict for this romance. 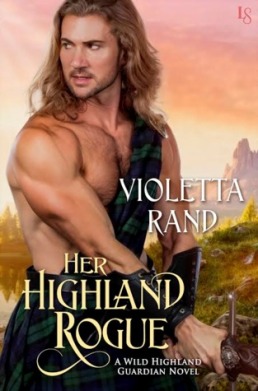 One-Sentence Synopsis
A woman with no knowledge of her origins runs away from the clan that raised her when she’s cornered by one of the warriors, only to be retrieved by the clan lord’s son. For a full synopsis, see this book’s Goodreads page.

Mysterious Past
Aileana has been raised as a McRae, even though her origins are a mystery, and while the family head has always treated her well, some of thee servants have been cruel. Aileana has stood her ground for the most part, but when one of the clan’s warriors gropes her in the kitchens, she runs away, knowing that if she speaks against him, she may bring a lot of pain on herself. He’s a warrior, after all, and seemingly a respected one. So she runs to the mountains and finds shelter with a woman who lives alone and is known as something of a local witch.

Scottish Bodyguard
Errol McRae, the lord’s son, is sent to retrieve Aileana, a prospect he’s not especially thrilled with. But when he finds her and brings her back, he finds himself attracted to her in a way he wasn’t before. Which is inconvenient, considering his father’s health is failing and he’s getting ready to go off to war. But when he finds out why Aileana ran away, he becomes her protector, ensuring that she’s safe from the man who attacked her in ways he hadn’t quite planned on.

Man’s World
I enjoyed this story, but it was definitely set in a time and world where women weren’t listened to or believed. Aileana’s feelings on the man who attacked her wouldn’t have been taken into account if it weren’t for Errol standing up for her. I can usually block that out, because it’s prevalent in many of the historical novels I read, but for some reason, it really got to me in this one.

Hard Knock Life
The story has something of a mystery in that Aileana doesn’t know who her real parents are and has that empty “little Orphan Annie” emotional vibe. Technically, the reader isn’t told until later what the deal is either, but it’s not hard to take some guesses.

Conflicted About Conflict
The bad guy of the piece comes back to make things even difficult, and this was one of the parts of the story that probably made sense for the time but made me extremely mad. The guy threatens Aileana with rape first, then he says he’ll murder her if she goes back to Errol. So she runs away. Again. And if if I think about this logically, I’m like okay, sure. She was scared, because as was proven earlier, women really couldn’t say much. But at the same time, Errol had already stood up for her and had proven he was going to protect her. I mean, it had to happen like that so what happened could happen, but come on. Maybe I just wanted Aileana to be a little bit stronger and feistier?

The Romance Factor
Errol has this “awakening” moment where even though he’s lived in the same castle as Aileana for years, he suddenly sees her as a woman who totally lights his fire. I liked it in the context of the story, because while normally I might wonder at the reality of it, Errol was definitely one who took his fighting and serving seriously, so I can see where he wasn’t looking at women often. Also, the woman had the protection of the house. It wasn’t like she was a hooker. I loved his protectiveness of her and the fact that he knew he was falling in love with her, but like most warriors, had to have the inevitable conflict with himself before he admitted it. 3/5

The Steam Factor
The sexy times are detailed but written sensually rather than naughtilyy (I believe there’s a difference). The effect is the same though. Lots of spice. 5/5

Final Thoughts
While a few minor things annoyed me, I liked this story and the characters. The emotion wasn’t always there, but when it hit, it hit hard, and the story itself, including the mystery of Aileanna’s parentage, kept me hanging on through the end.