So far, this has been my favorite book in the Wedding Belles series. So much emotion, some great romance, and the brilliant, funny dialogue that I love. 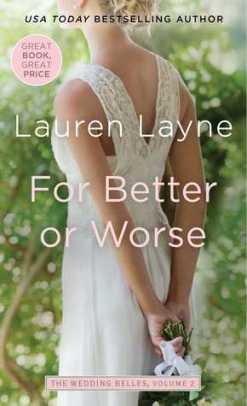 One-Sentence Synopsis
A wedding planner tries to deal with her obnoxious but sexy neighbor. For a full synopsis, see this book’s Goodreads page.

She Works Hard for Her Money
Heather is somewhat of a workaholic, and she’s determined to get promoted to a wedding planner for the Wedding Belles. She loves her job and the people she works with, so you’d think it would be easy, right? Unfortunately, she’s been given a challenging client who seems to want to take a hands-off approach, giving Heather no feedback towards the wedding she’s supposed to be planning. So when she’s already tired and stressed, she doesn’t take it well when her neighbor starts banging his drums while she’s trying to sleep. That’s not a euphemism, though the banging is a recording and he’s actually playing a guitar.

Living for the Moment
Josh Tanner seems to not have a care in the world, and when Heather tells him to calm the noise, he pretty much gives her a “I do what I want” attitude (though to be fair, he does calm the noise). After dealing with an illness, the former finance tycoon has decided to live a more carefree lifestyle. Which means playing in a band and getting Heather to bake him banana bread. Oh, and to get in her pants. Because a guy has to have goals.

Boundaries
Eventually, these two realize how much they want each other, but Josh is hesitant to actually fall for Heather. Due to the nature of his illness, he knows he could possibly “leave” her one day, and he doesn’t want that. So as much as it hurts him, he lays out the whole “no relationship” rule. Like that ever works.

Sexy Tension
Josh and Heather were fun from the start. It’s sort of a frenemies to lovers story, and their dialogue and banter was spot on. I also loved the little ways that they made each other jealous as part of their sex and love foreplay. Josh is walled off, but you totally feel for him and kind of understand his reasoning. Heather gets a little too wrapped up in her work, but it’s hard to fault her for it when she really enjoys what she does. Still, hooking up with Josh gives her the chance to let loose a little bit.

The Romance Factor
This book pulled at my heart so much. Josh and Heather making each other jealous was both funny and swoon worthy. Also, Josh’s “big gesture of love” was pretty amazing and sweet. 4/5

The Steam Factor
A little light on the sexy time details, but enough to know what’s going on. 4/5

Final Thoughts
This series just keeps bringing it, and it keeps alluding to the relationship in the next one. I’m not a wedding person at all, but you don’t have to be to love these books.