This 2nd book in the Java Jive series entertained me way more than I expected. Though the first one had been okay, I thought the characters and world felt more familiar and comfortable in this one…and I really liked the unexpected twists.

One-Sentence Synopsis
A woman sets out to clear her friend of murder charges by finding the real killer. For a full synopsis, see this book’s Goodreads page.

Where We Find Our Heroine
I’m going to try really hard not to spoil anything here. We met Juliet in the first book, Death Before Decaf. In this one, she’s still running the coffee shop, still besties with Pete, still enemies with Pete’s girlfriend, Cecilia. She’s also sort of dating Cecilia’s brother, Stan, though she’s not terribly impressed with him, nor is anyone else, including his family.

Too Nice to Be a Murderer
Weird things start happening with Cecilia’s family, and there’s a good deal of distrust placed on Stan. But when Cecilia is murdered (not really a spoiler since its in the Goodreads synopsis) and it looks like Pete did it, Juliet needs to do her own sleuthing to find out what’s going on. She’ll stop at nothing to prove her best friend is innocent, even if that means getting other people in trouble and ignoring the advice of Ryder, the guy she’s allowing back in her life after he lied to her in the previous book.

Love Triangle
This book isn’t necessarily a romance, but a mystery with romantic elements. There’s still the weird thing between Pete and Juliet that hovers around the line of friendship and something else. Yet when Juliet sparks things with Ryder, those feelings are genuine too. I enjoy this kind of thing in a mystery novel, and I like wondering who she’s going to end up with. For the record, I was Team Pete in the first one, but I may have switched my allegiance.

Twisted
There were a lot of funny moments in this book and there were a couple good surprises. I liked that with regards to the key players and characters, the author wasn’t afraid to work outside of the framework a little bit. For instance, Cecilia wasn’t really a front and center character, but she seemed important enough that I was legit surprised when she was the murder victim.

The Romance Factor
The romance isn’t strong, but I felt it was more present in this one than the first. Juliet flashes back to some feelings about Pete, but the sweetest parts were between her and Ryder. I’m so conflicted, because I don’t know who I want her to end up with. There’s a touch of angst, but again, the romance takes backstage to the mystery. 3/5

The Steam Factor
Besides a few mentions of getting it on with Ryder and the revelation of some sex toys at one point, there’s not a whole lot of steam in this one. 2/5

Final Thoughts
This was a fun story that kept me engaged. The first one definitely set a foundation that made this one stronger. Though mysteries aren’t my first choice, I hope the author has more planned in this series, because Juliet is growing on me and I want more of her and her weird little life.

This poor book. It had been on my list to read for awhile, but I kept shifting it back in favor of books that would be published sooner. Finally I committed to reading it, and though it was originally described to me as a cozy mystery, which isn’t usually my thing, it ended up being a cute, fun read. 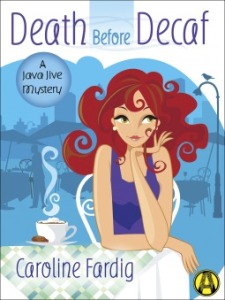 One-Sentence Synopsis
After a coffee shop worker is murdered, the woman hired to save the shop from closing and the owner, her long time best friend, set out to find the killer. For a full synopsis, see this book’s Goodreads page.

The Good Stuff
There were a lot of funny moments in this book, some of them absolutely absurd, including a funeral scene that was straight out of some hardcore redneck reality TV show. The widow of the murder victim was fairly trashy, and I couldn’t help picturing her as Jennifer Coolidge (who I love, but who would play that part perfectly).

I enjoyed Juliet, who seems self aware of most of her downfalls, yet secure enough in herself to continue chasing a mystery even when she gets in over her head. My problem with other cozies I’ve read has been that the heroine annoys me, but that wasn’t the case in this book.

Things That Made Me Go Hmmm
The people in cozy mysteries never know what’s going on, and in this case, I felt like they had failed to read a news article since…ever. During the course of the story, there are very obvious identity theft signs, and yet no one seems to pick up on these. I couldn’t tell if they were really clueless or just being snarkily obtuse.

The Romance Factor
It’s hard to classify this as a romance when the heroine is sleeping with a guy other than the one you want her to be with. I know other readers were all about the mysterious guy of the love triangle, but I was rooting for her to hook up with Pete, her bestie, who she obviously had feelings for. In both cases, there were subtle hints of romance, but it definitely took second place to the mystery aspect of the novel. 2/5

The Steam Factor
Sexy times were talked about, but for the most part, this was all closed door. 1/5

Final Thoughts
There is definitely paved way for another book in this series, and I can honestly say that I’m not entirely sure how things are going to pan out for Juliet with regards to her love life. This was a fun read and I’m looking forward to seeing what happens in the next book.