Stepbrother novels are a subgenre I hadn’t tried until this one. I never thought the set-up was a big deal. I mean, come on. Your stepbrother isn’t your real brother, right? Then again, I guess I’ve never been in that situation. After reading this, though, I can see why there might be some drama. 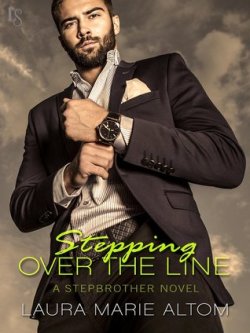 One-Sentence Synopsis
Step-siblings struggle with their strong feelings for each other amidst the chaos of random sexy times, paternity questions, and murder charges. For a full synopsis, see this book’s Goodreads page.

To Sister or Not to Sister
The lives of these people are a hot mess from the beginning. Garrett has lusted after his stepsister since they met, but it’s always been from a distance and she’s been the one woman he can’t have. It becomes obvious that she has mutual feelings when, the night of a party thrown by her parents, she sneaks away with him and jumps him, despite the fact that she has a boyfriend and despite the fact they’re supposed to be siblings.

Change in Future Plans
Savannah is getting ready to go to med school, so the fact that she finds out she’s pregnant shortly after her indiscretion with her stepbrother throws her plans off. Her boyfriend, thinking the baby is his, proposes marriage and she rolls with it. Because there’s a chance he’s the father too, right? Instead of Savannah getting a paternity test or signing up for the Maury show, she decides to just hope for the best.

Oops…Did I Do That?
We have the perfect set up for some good conflict right there. But then things take a turn for the crazy, and Garrett ends up accidentally killing Savannah’s fiance after they find him screwing one of the bridesmaids. Instead of fighting the charges (Garrett could have cried self defense), he goes to jail for five years on an involuntary manslaughter charge. In the mean time, Savannah has her kid, continues seeing her dead fiance’s crazy family, and manages to tell herself that the fact that her son looks just like Garrett is all inside her head.

Post Jail Fun Times
When Garrett finally gets out of jail, his life is very different than he planned, but he’s still attracted to Savannah and she to him. They continue their whole trying to stay away from each other thing because they don’t want to hurt their parents, they know the dead fiance’s parents and brother could make things bad for them, and they’ve both fallen into the society view that it would be wrong for them to be together. Even though, much like drug addicts, they end up jumping each other when they can’t hold out any longer.

Tension is Good
Even though there were things about this book that drove me nuts, I really liked it! Having not really read the synopsis beforehand, I was surprised at the whole murder thing. I liked the tension the author built between Garrett and Savannah. Also, even though I was skeptical about why anyone would question step-siblings (I mean, come on, they’re not the Lannisters), the setting of the story and how the whole thing was written made it seem believable. The families are southern society families, and status and how others perceive them is everything.

Girl, Do You Even Medicine?
I liked Savannah, but for someone with a medical degree, she made some pretty dumb decisions. Like never using a condom. And not getting a paternity test. At least she was self aware of how dumb she was being, so it wasn’t glossed over, but seriously. Get it together, woman. Garrett was hard-edged, but I really felt for the guy. His tendency to run hot and cold was sometimes a little annoying, but overall, he worked for me as the tortured hero.

In-Laws & Kids
The story had a bit of a danger factor with regards to dead fiance’s family and his weird brother, and things escalate towards the end. Savannah’s son was just meh for me. Sometimes I find the kids in stories cute and other times they annoy me. This one was somewhere in the middle, probably a little too cute and well-behaved to make him seem real.

The Romance Factor
This definitely wasn’t the type of romance that gets me mushy. It was more of a dangerous, forbidden love that caused a lot of tension.  Though they had a few sweet moments (and I melted a little bit at how much Garrett wanted to be Savannah’s son’s father), I got more of a intense vibe from them than anything. 3/5

The Steam Factor
When I think of the sex scenes in this book, the word that comes to mind is “explosive.” Since they have to hide what they’re doing (and are doing it after trying to exert large amounts of willpower first) sexy times are definitely intense. There’s one scene in particular that was pretty rough and dirty and involves a warehouse. 5/5

Final Thoughts
Much like my foray into biker novels, I haven’t yet formed a full opinion on the stepbrother subgenre. However, I really did enjoy this book. I liked the intensity and the flow that the story took on. For characters who are part of southern high society, they all had a gritty, darker edge to them, and I thought it worked really well for the story. Definitely worth the read for someone not sure how they feel about stepbrother novels, though I would imagine fans of this subgenre would really enjoy it.