Last weekend we had a zombie themed game day with friends.

We started the afternoon out with a new game our friends picked up.

The game is timed and only goes so many rounds, but there are ways to make it different each time you play, namely by choosing different characters, playing with a different number of people, and flipping the board pieces for different locations.

There are no writing on the cards or characters other than the names. It’s all conveyed with the use of symbols so it can be played across different languages.

Second, we played Zombie Munchkin. Munchkin in general has become a staple of our gaming sessions, but the Zombie one is a little bit different because you play as the zombies trying to fight the humans. I wasn’t completely sold on it at first, but now I love it. 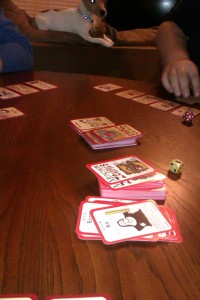 We finished off the night with some Left 4 Dead on the Xbox, and by “we,” I mean J. Felbs and Tony O. Originally we planned on a four person game, but then we found out that L4D doesn’t allow for four players. Which is all good, because after watching the first few minutes of the game, I realized that it wasn’t a game for me (I’m really slow and not accurate when it comes to first person shooters). But watching was fun, and I chilled with C and played some MtG instead.

Another successful gaming night in the books!